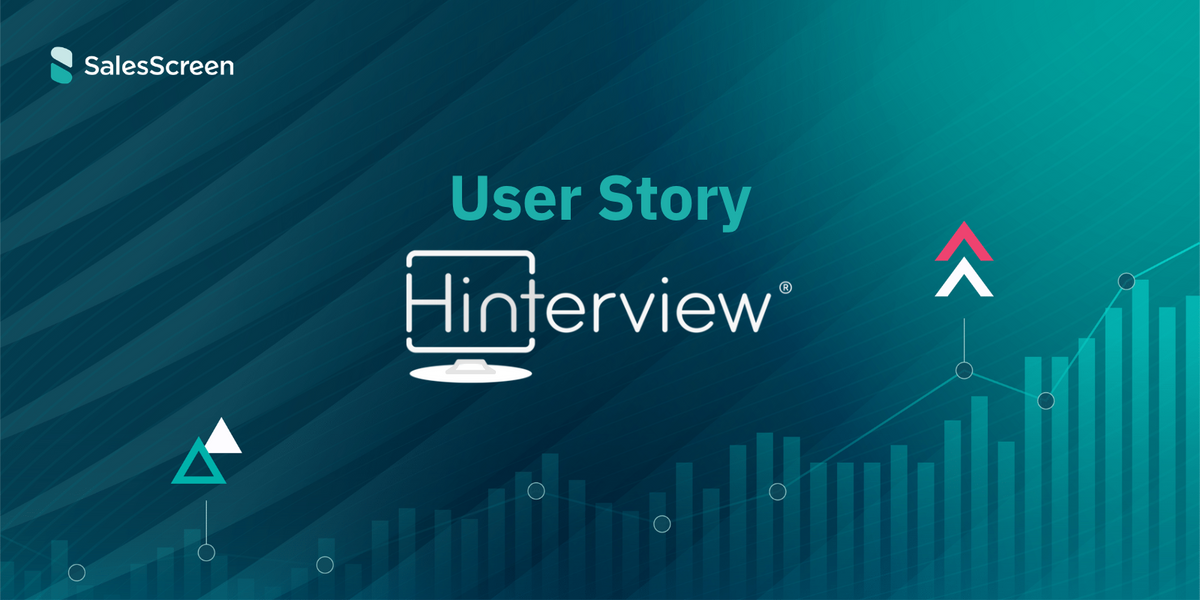 SalesScreen: I'd love to start with your experience as an end user, what was it like getting into the platform for the first time?

Courtney: We actually had [SalesScreen competitor], and we're all in the office. It would go off occasionally. But it wasn't exactly reliable. We didn't have as many celebrations or competitions. It wasn't as interactive. So it would just kind of go off sporadically, and no one really focused on it. It was kind of like a dead asset and didn’t really promote that competitive culture in sales you need on a day-to-day basis because if you don't have some sort of motivation or healthy competition, the days can drag on.

But when we onboarded SalesScreen, it was not only a great way to gamify our KPIs, but we got a visual representation of the data we wanted to see. We can adjust from month to month or week to week what we want to see and align to our company objectives, company targets, and so forth. So that's been really vital. And given that Hinterview is a start-up, we're quite an agile business. We have the KPIs we want to hit, but they change so frequently. So you have to be really agile as an individual, but also for it to be clear and concise across the team, what our team objectives are. SalesScreen gives a really clear depiction of that, and it keeps everyone on track. You can jump in one day, change something, and you don't have to go through hours of customer support. So I really like the flexibility on how you can make it your own and adapt it.

SalesScreen: What would you say is the team's favorite feature?

Courtney: I would say the competitions are probably all of our favorites and the coins. I've accumulated 612 coins, but I'm just holding them hostage until I can find something really cool to purchase*. It's a nice little bonus that's not my paycheck. So that's really cool to bring that morale and excitement to sales. We also have a massive TV in the office, it's the hugest TV, and we have some people that work remotely. So they can log into SalesScreen and still be involved with company incentives, company competitions, and KPIs and track all of that and still be involved in the company culture and excitement without physically being here. So when anything happens, whether you're in the office or at home, you're still included. It brings company culture to your house so you can still be involved in other people's success, which we really encourage.

SalesScreen: You guys really do love the coins!

Courtney: I think everyone would be so disappointed to lose the coins because you could have some people who have made the most dials or had the most conversations but, for whatever reason, may not have booked the most meetings or had the most deals. So winning coins, it's still celebrating hard work. In sales, you recognize that there's not always instant gratification for the amount of work you're putting in. But if you can come away from the day being like, “I've done as much as I possibly can,” that effort will compound, and you’ll get a meeting, or a deal will come through. So it's just ensuring that everyone leaves the end of the day feeling like they’ve put the effort in and that really helps alleviate any lack of motivation.

SalesScreen: I love that - sales isn't about instant gratification.

Courtney: I was thinking about this the other day because the one good thing about SalesScreen is you do occasionally get that instant gratification, but sales is still a long game. There's a meeting I booked the other day which I've been trying to book for like a year, it just so happens I met someone in person at an event, and we spoke and got the meeting on the books. And when it came up on SalesScreen, it was so exciting everyone could see it.

I think it would have a massive impact on our overall team motivation if we didn't have it, I think it would really impact morale. I think people would feel a little bit lost without it. And being able to pull certain reports from it, too. We use other technologies like our CRMs but tend to rely on SalesScreen to pull those reports and track KPIs and outcomes.

SalesScreen: Did you guys think gamification would have such an impact on your teams?

Courtney: I didn't actually realize how much we needed some form of gamification. Being able to visualize data for the whole team and to really manipulate what you want to see on a day-to-day value has been crucial. And the team would literally be lost without it, I think they would freak out. We had a bit of a systems glitch, and things weren’t coming through to SalesScreen. No one cared that they had actually booked a meeting, they were like, “why the hell isn't my song going off?!”

That's been a really pivotal point for us. I think when you are having a slow day or a slow week when you do something when you have an outcome, and the screen goes off, it's a great way to have that recognition and celebration. And reassure everyone that these things will happen. Sometimes it's the market, sometimes you need to work harder, but having that go off, especially when it's been a really hard day. That’s the cherry on top. And everyone can celebrate with you because not everyone in sales is the type of person to announce their wins to the team unprompted, and I think there are plenty of people who are like that. So if we didn't have something like SalesScreen to acknowledge those outcomes or wins, you wouldn't necessarily get that acknowledgment.

We have other areas of the business that come into the office and sometimes like“what's that noise going off?” so other people can actually celebrate outcomes and wins as well. It's quite cool from that perspective where other teams in the office can get involved with the success that's happening within sales because that ripples to the rest of the company as well.

SalesScreen: What is your celebration song?

Courtney: Oh, gosh. It’s“The Assignment” by Tay Money. That's been my song forever, you should listen to it!